The first battle report on the blog features Thomas using his Space Wolves and the new Imperial Knight against Zarak's experimental Necron force, in a game of escalation.
﻿
﻿

Pre-Game
Zarak- What a surprise!!!  I wasn't expecting that behemoth to be on the battlefield yet, I might be in trouble here today...

"In this list I was testing out a few different units, mainly the C'tan Shard with Grand Illusion and the larger Transcendent C'tan too. My plan was to deploy first in a manner not reflecting my actual plan, letting the space wolves deploy, then moving my units to suit, giving me a 1st turn advantage with the grand illusion.   Another ploy I was hoping to use was keeping all the squishy units in reserve, so that the easiest targets were t7 or av13... This would leave the board clear for the monolith to deepstrike in with my warriors in relative safety.  In all the games with my necrons, the annihilation barge has always been a real points earner, however, i still remain sceptical, and need to see more to believe, this game will decide its fortune with a positive outcome resulting in an empty wallet.  With these experimental units in place, it left me with only 175pts to spend on the troops section and another c'tan power. I decided to spend 30pts on the tachyon arrow, and 15pts on the pyroshards, leaving me with exactly 130pts to spend on the troops section... OH... well its two minimum warrior squads then... I certainly don't want this to be an objectives game.  Hopefully this game will shed some light on where to go with my necron force."

Thomas - Muhaha! Surprising Zarak with the Imperial Knight (which had arrived about a week and a half earlier, despite me insisting to Zarak that it hadn't) is working like a charm! Now to kill me a Transcendent C'tan...

"So my list starts off as all of my Space Wolf lists do, with my tank of a character Ulfgir Ironfist, my Wolf Lord. He always has a retinue of 10 Grey Hunters. Two more squads provide basic fire support/bodies on the field. The Long Fangs have proven themselves useful time after time, so they're in. Then I flesh out the force with a bit of armour in the form of a Land Raider Crusader for Ulfgir and his Grey Hunter retinue. Next, of course, the Imperial Knight, making his first appearance

Deployment
Having rolled a Relic mission, we set up our forces, Ragnarok, the Imperial Knight, deployed in the middle of the Imperial zone, with the Ironwulf (the Land Raider) to his left, and a Grey Hunter pack on the other side. The Long Fangs and the third Grey Hunter pack deployed in a supporting position in the buildings behind the main line.

The Wolf Lord manages to get the Escalation Warlord trait (Uncanny Defence) which reduces the Destroyer rolls made by the Necrons by 1!

The Mourngul (What i use as my Transcendent C'tan shard of the nightbringer) set up opposite the Knight, with the C'tan shard to its left. The Annihilation Barge took the right flank. The remainder of the Necron force went into reserves. 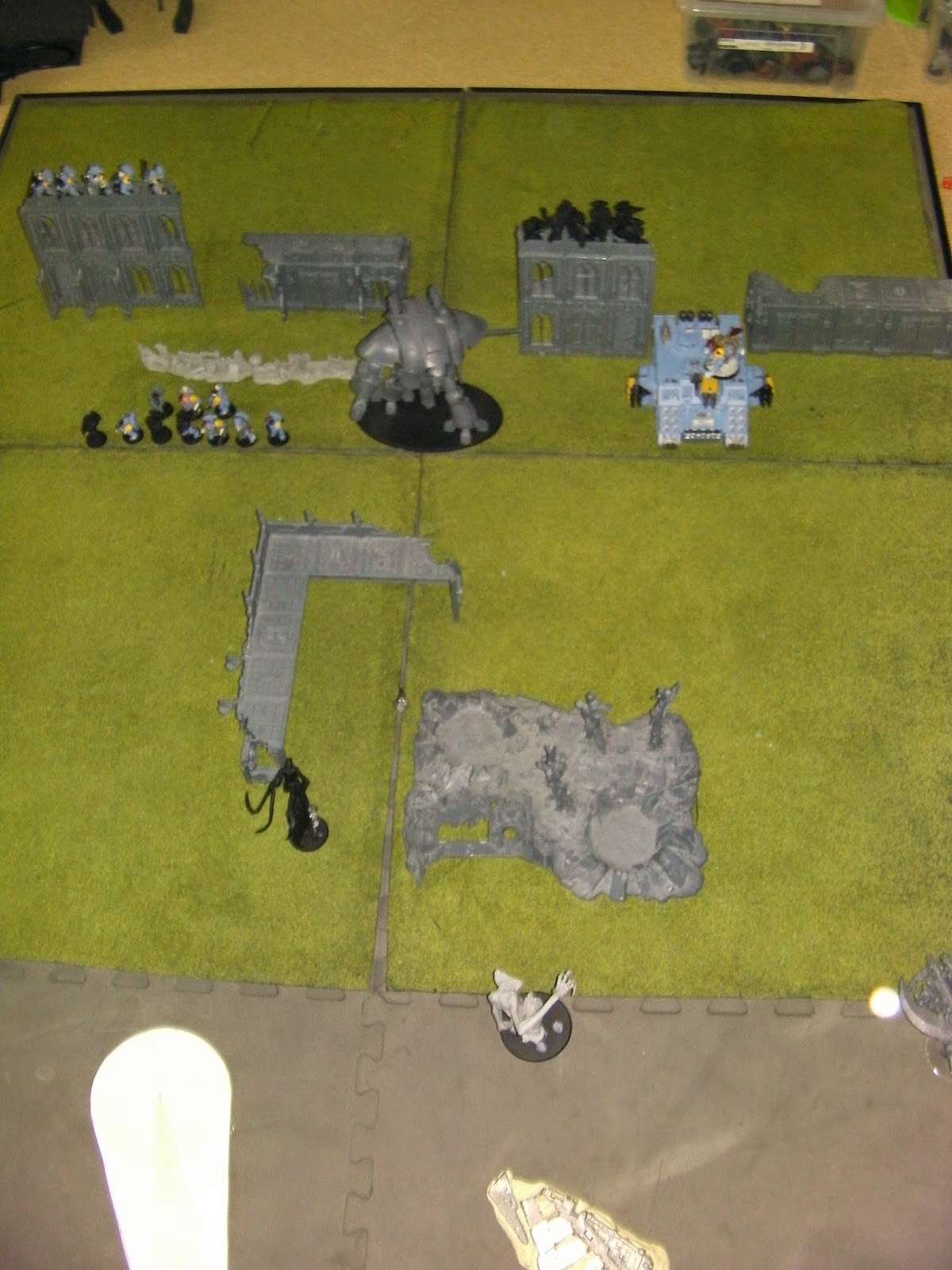 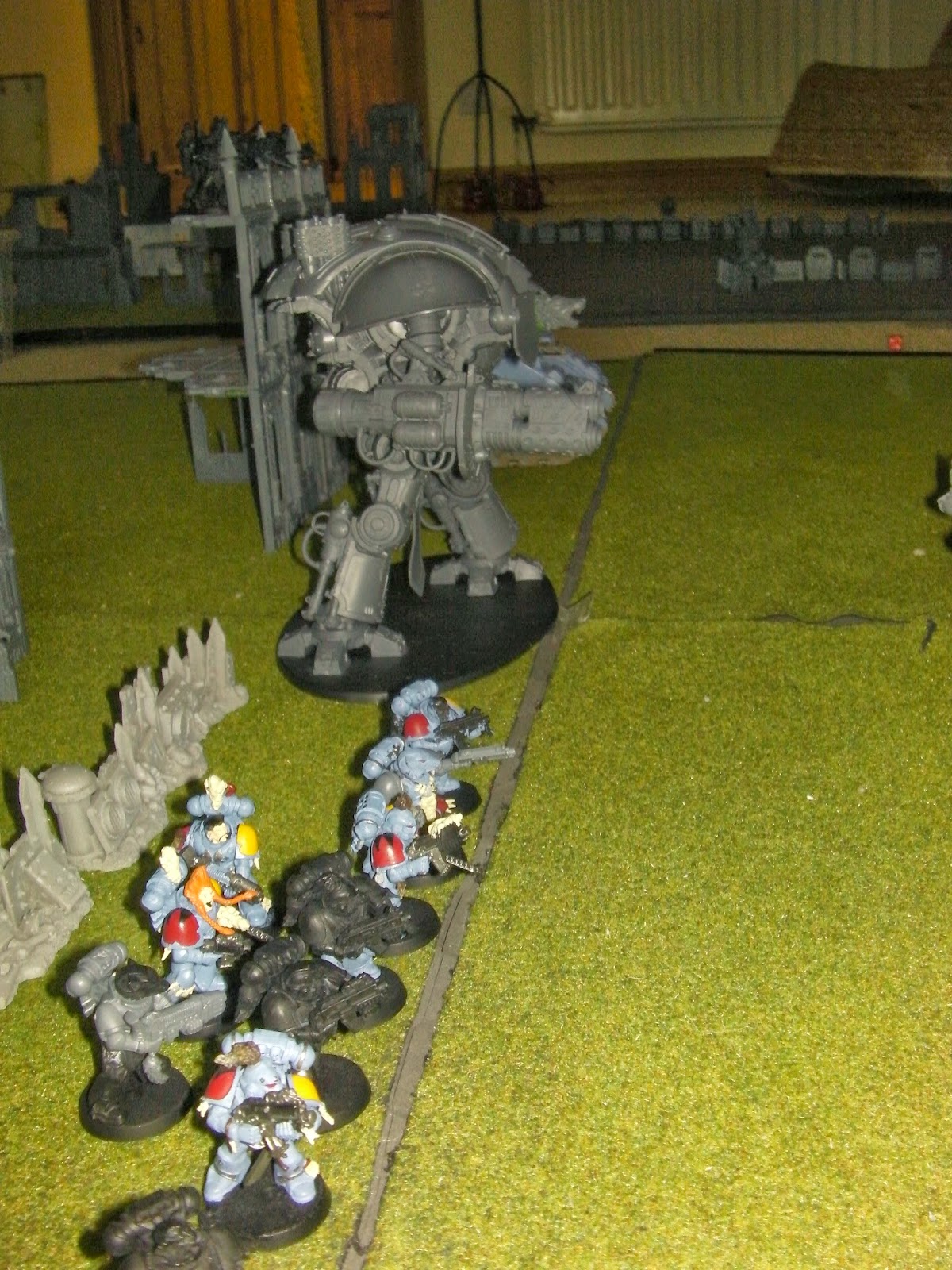 First Turn
﻿
The Space Wolves won the first turn but the Necrons manages to steal the initiative (Zarak - The one bit of luck I seemed to have in this game, i never fail a sieze the initiative roll).

The transcendent c'tan moves to the right of the Land Raider (Zarak - I forgot my strategy of always putting the transcendent C'tan on a flank) and unleashes its Destroyer template, penetrating the Land Raider once (rolling 1 with a -1 modifier) which causes it to explode. A Grey Hunter perishes in the explosion. The C'tan charges forward, firing its Pyroshards at the Grey Hunter pack, which fails to kill anyone. the Annihilation Barge follows the transcendent C'tan and fires its Tesla Destructor, taking a Hull Point off the Knight.

The Knight and the Wolf Lord's unit respond to the initial strike by making a beeline for the Transcendent C'tan now isolated on the flank, but the only weapons capable of wounding it, the plasma guns, failed to wound it. The Knight powers up its Thermal Cannon, vaporising the Annihilation Barge in an explosion of superheated gas, while the remainder of the Space Wolves shooting did not damage anything else. 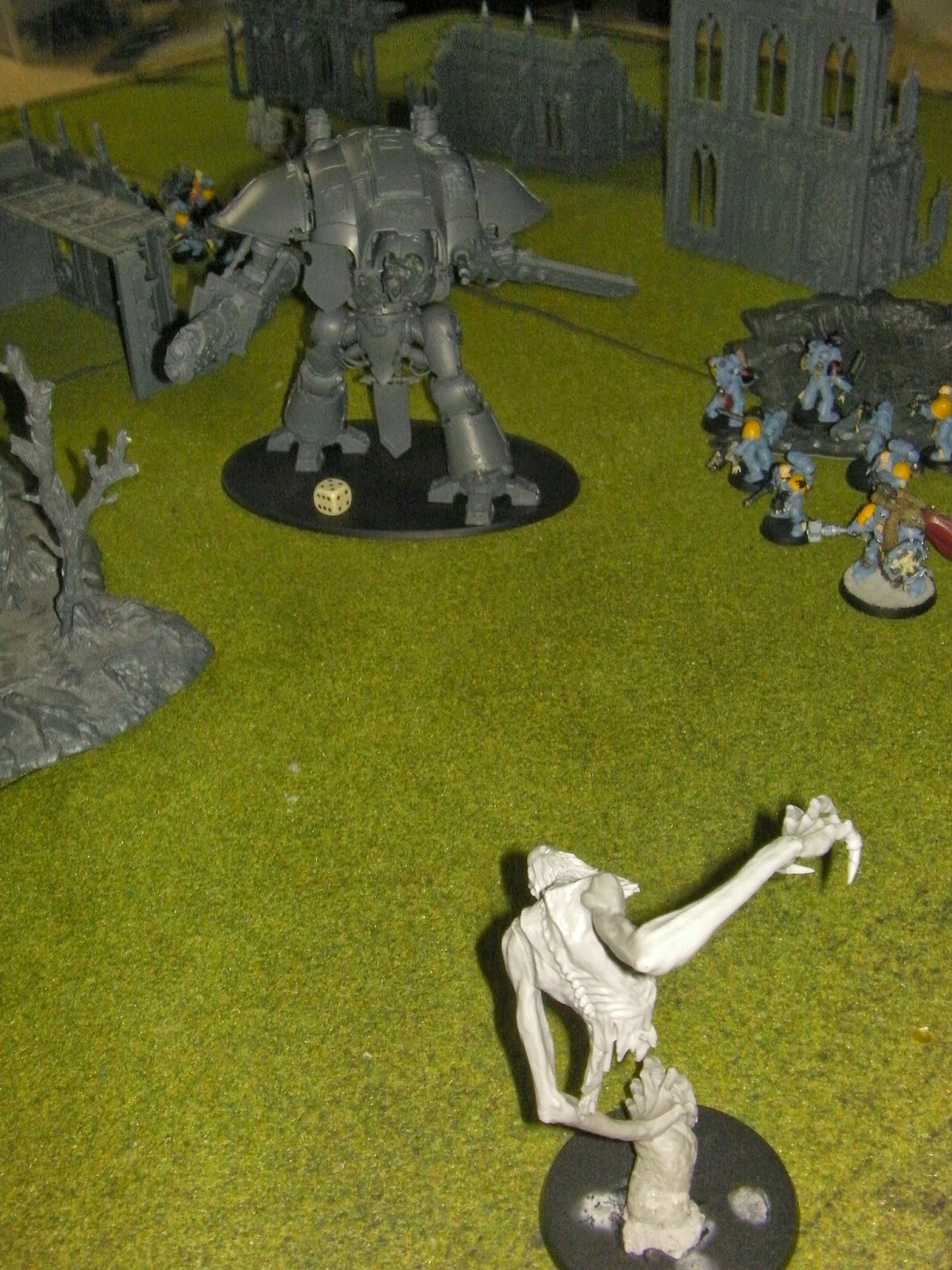 The Transcendent C'tan sizes up his opponent, the mighty Ragnarok.

Turn 2
﻿
The Necron reserves failed to arrive, with the exception of a squad of lowly warriors, who due to the absence of the Monolith, had to walk on, far from all of the action. The Transcendent C'tan moved over the Knight, hitting it with its transliminal stride, another 2 hullpoints lost. Then came the dreaded wave of withering, scoring 3  glancing hits on the knight, which of course, the Knight then goes on to ignore with its ion shield, saving it from oblivion. It also catches three of the Wolf Lord's unit, but poor rolling only results in one death. Cosmic fire was unleased from the heavens as the transcendent C'tan channels the power of the stars themselves through its own form. Seven more fall, contact lost. 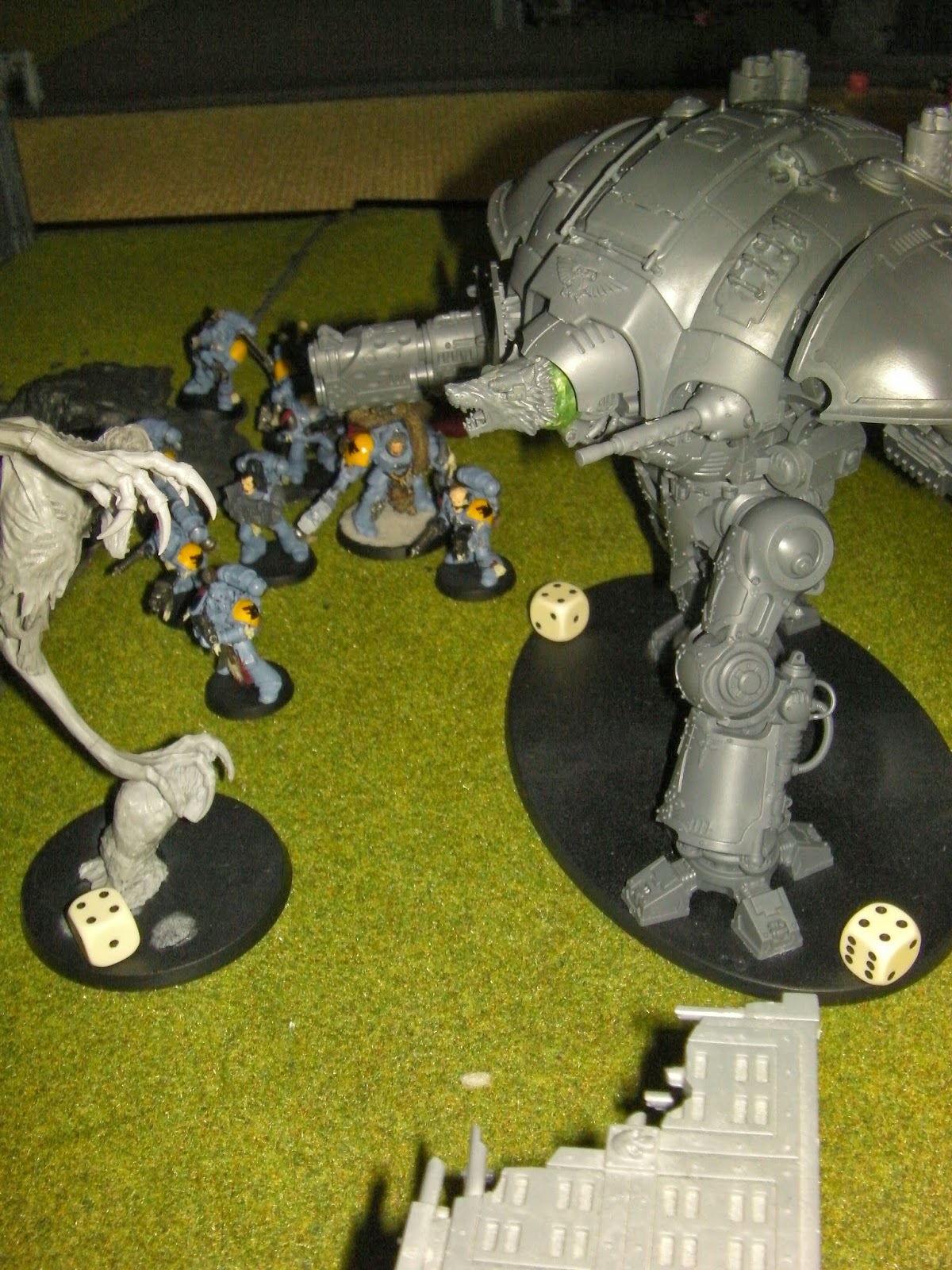 The Knight and the Wolf Lord turn around, and the remaining members of the depleted Grey Hunter pack advance towards the C'tan. The Long Fangs and support unit of Grey Hunters manage to take two wounds off the transcendent C'tan. The Knight and the Wolf Lord charge the Transcendent C'tan, which chokes its penetration rolls against the Knight, rolling 5 ones, instead of destroying it! 1 Hull point is lost. The Knight then with a clash of metal and a whirring of gears turns round to cleave the Transcendent C'tan in twain with one fell blow, thus ending the main threat to the space wolves, victory is surely assured. 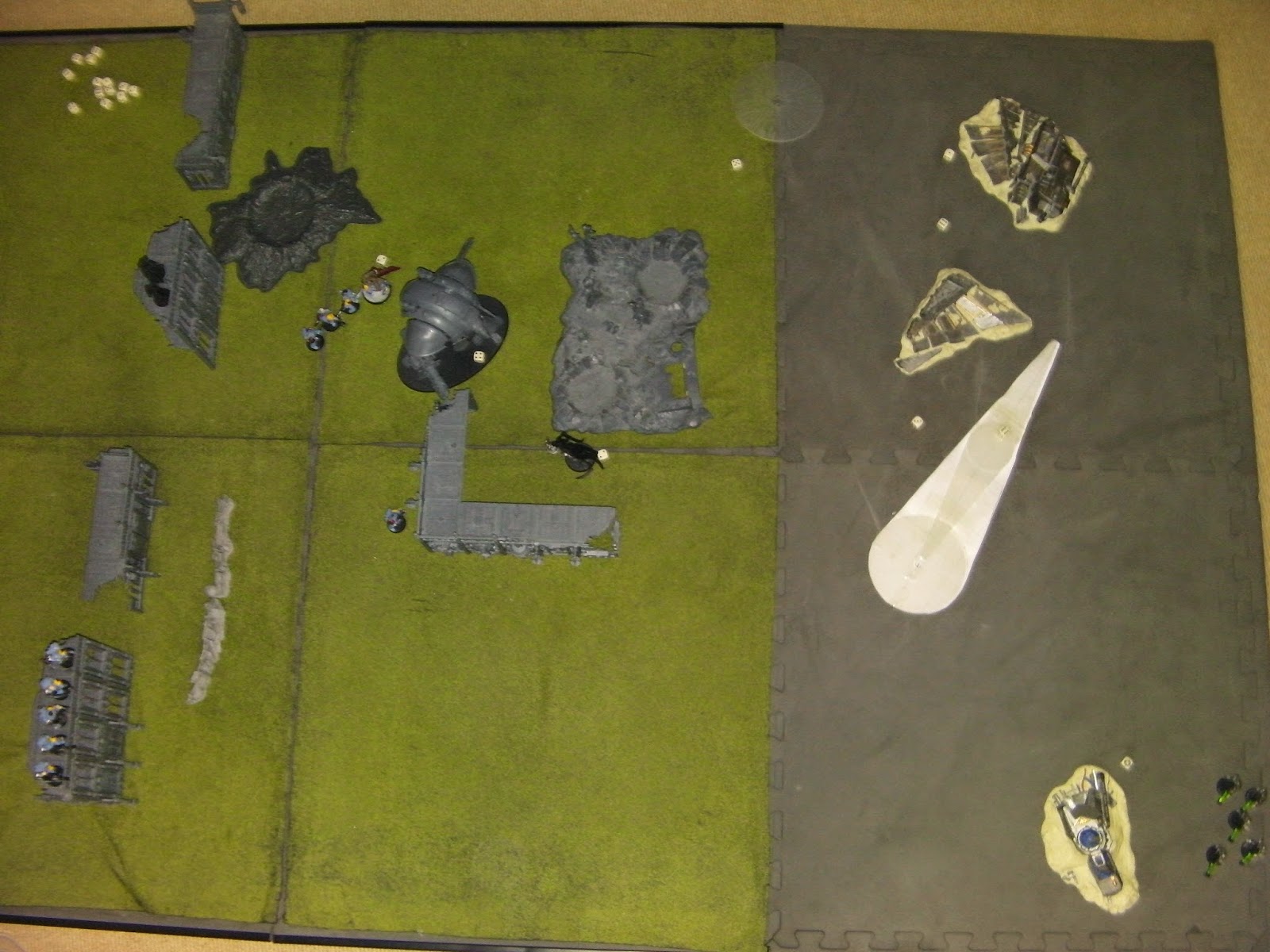 The aftermath: Things look a little one sided now.

Turn 3
﻿
The Necron reserves fail to arrive again. The C'tan shard, having lost its larger transcendent C'tan support, attempts to avoid combat with the Knight by jumping up onto the ruin, its Fireshards killing a Grey Hunter this time. The wariors continue to advance, slowly, methodically, hopelessly.

The Knight mirrors the action of the warriors, but once again instead turns around and blasts the C'tan, but fails to wound, as the necrodermis holds strong. The Grey Hunters now claim the lost relic as it lays unguarded, falling back to friendly lines. Where upon the rest of the Space Wolves, shooting in a blind hail of bullets at the c'tan, provide the much needed cover for the retreating brothers. But the c'tan remains still. 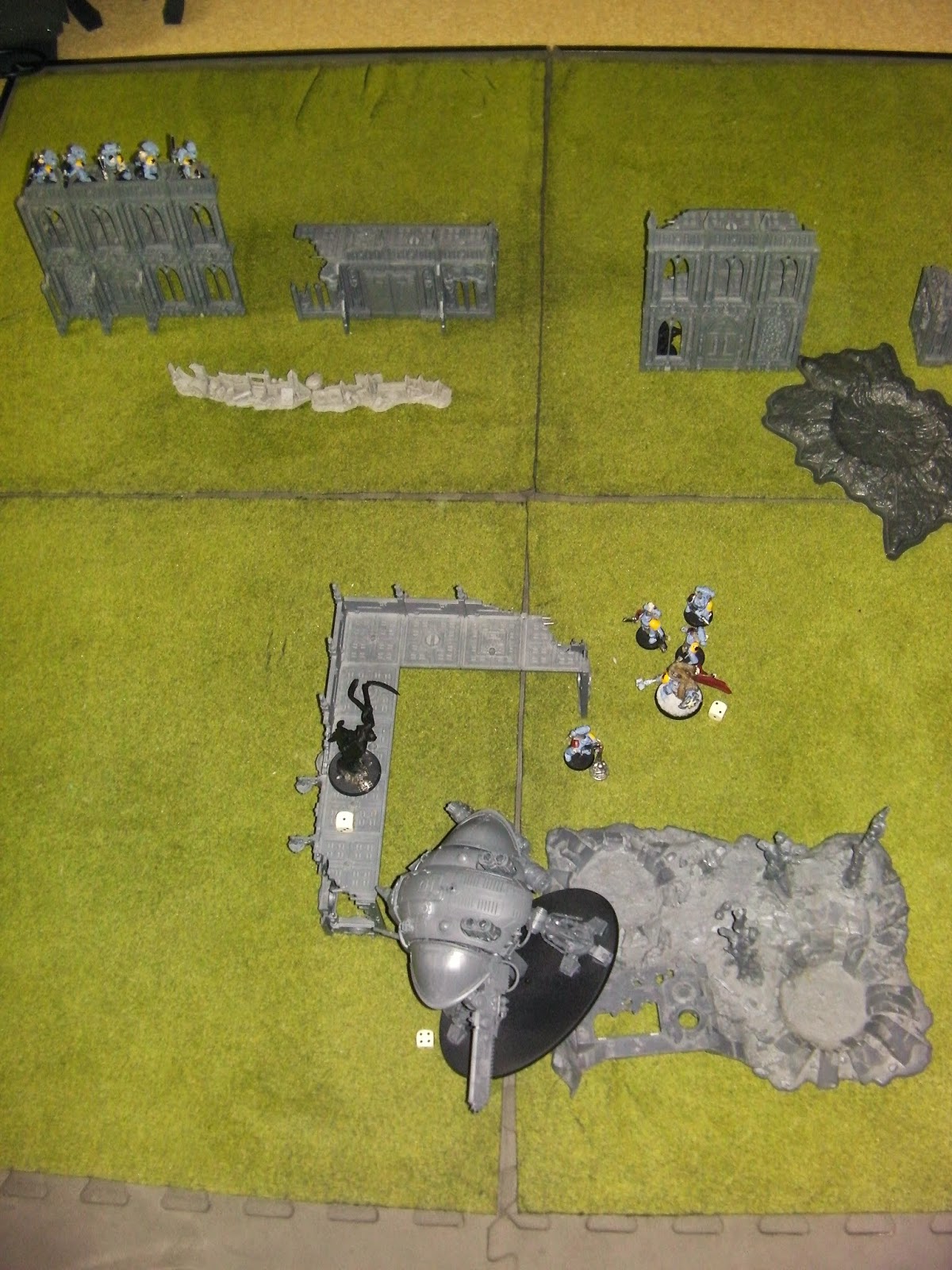 
Turn 4
﻿
The Monolith and warriors finally arrive. The Monolith Deep Strikes next to the Wolf Lord, and the warriors and Lord walk out of the Transdimensional Door. All of the warriors fire at the Knight, scoring two glancing hits, only the ion shield once again stands in the way. The Knight stumbles backwards as the gauss flayers hit, the green lightening arcing around its bulk. At the last moment the ion shield once more powers up, losing only one Hull Point as the shield deflects one hit. The C'tan and the Monolith fire at the Wolf Lord, killing his accompanying Grey Hunters, shrugging off the attack, the wolf lord lets out a roar, gesturing at the overlord to initiate a duel to avenge his fallen comrades.

The Knight walks up to the Monolith, immobilizing it with its Thermal Cannon, but the killshot goes to the Lascannons of the Long Fangs, still in their holed up in their nest. The exploding monolith, now is a threat to the necron force, as the living metal buckles, the energy of the monolith is released, wounding 4 warriors, one falls. The Knight's Heavy Stubber claims a lucky kill, turning and firing at the C'tan, taking its final wound! The Wolf Lord launches himself at the Overlord, challenging him. The Lord's Staff of Light bounces off his Terminator Armour, walking through the overwatch, bathed in a menacing green light, the Wolf Lord issues a challange to the Overlord, who accepts knowing that its his only chance of escaping the Blade of the Ragnarok. It would make no difference however as the wolf lord goes on to dispatch him with contemptuous ease, running down the warriors  who tried to flee as survival protocols kick in.

At this point, Zarak concedes the game to me. FINALLY my run of bad luck has ended!

Thomas - YES!!!! That must be my first victory against Zarak in ...what, months? I'll take it! I'm looking forward to how the Knight will impact my games in the future. The Knight performed pretty well, seeing as it was perhaps the only thing in my army capable of taking out the C'tan. Although, I'm wagering that Zarak won't place the C'tan near the Knight again...

Zarak - NO!!!! That must be my first loss against Thomas in ...what, months? Anyway enough plagiarism... I've learn't that the Knight is not to be trifled with, and that c'tan shards are best coalesced into the their transcendent brethren. Yeah, that was a poor show on my behalf, my luck just deserted me, I just seemed to be rolling nothing but 1s and 2s for the entirety of the game. The most important lesson that I can possibly take away from this is that the C'tan is good, but not that good, he's not immortal, so treat him that way.

Other games that day

Thomas - Another battle, this time my Space Wolves found themselves against the Blood Angels and Grey Knights of Sam, ended in a close fought draw, with barely any models left on the board at all! (Somehow, Corteaz managed to take 5 Hull Points off the Knight in a show of heroics, surviving the ensuing Destroyer explosion!).

Zarak - In the other game I played, my list worked surprisingly well against the likes of the chaos marines. I effectively won the game with my very first ranged attack, the dreaded wave of withering, getting first blood, slay the warlord and clearing an objective (Killing 17 Cultists, a Chaos Lord, Bastion, Nurgle Marine, Quad Gun and 2 Havocs). Maybe the c'tan was best left for apocalypse after all...
The rest of the game was a whitewash, with my annihilation barge once again being godly, single handedly preventing the fall of my eastern flank, while the west was cleared by my monolith and Transcendent C'tan.
Again, the C'tan Shard did nothing whatsoever, proving to be the biggest waste of points since tau in 5th edition, I don't think we will see him any time soon.

I've learn't my lesson, and will be back even stronger next time...

Don't forget to share this post and follow us, either by becoming a member for free (see right), or by following us on google+. It really makes a difference. Thankyou.