Necrons: Phasing out or new-found synergy?

Now whether or not the necron rumours are to be fully trusted, I for one see them as kitbashes, the image below shows the green plastic rods on the necron warriors to be gone, most likely one of the rods from the ghost ark.

Now while this gives the painter more options, it could be a nightmare to get enough bits... It also makes me think... How can I future proof my necrons?

If they are'nt going to be green rods, could I do a different colour scheme, will I have to phase out my current warriors?

Having the green plastic rods has always limited the palette when choosing a colour scheme for most painters, so, with the slight possibility of this now gone, or whether I just want to kitbash, I thought it was about time somebody talked about it...

Now, I have already said I am skeptical about the rumours, but I will continue anyway, as it raises a good point, the green rods aren't in keeping with the rest of my gauss toting models such as my ghost arks and immortals.

When I originally started playing necrons I wanted to paint then in a bright colour, to really stand out on the battlefield much to the same effect as an eldar army, using yellows and turquoises, however, unbeknownst to me at the time, the green rods were a very limiting factor. Without the experience to paint over the rods, and after a few failed attempts, I had to stick to a basic colour scheme, the metal necrons we are all too familiar with.

However this paint scheme left much to be desired. And this left the scheme much like the necrons themselves; soulless. So with the slight possibility of a new necron release with 12 months, I have been scouring the internet and other blogs for inspiration, and it seems yellow is the way forward. Being one of the colours I initially wanted to paint them, yellow seemed the obvious route for me, with blue for the 'energy' colour. This gives a good contrast to the model that really makes the miniatures pop. 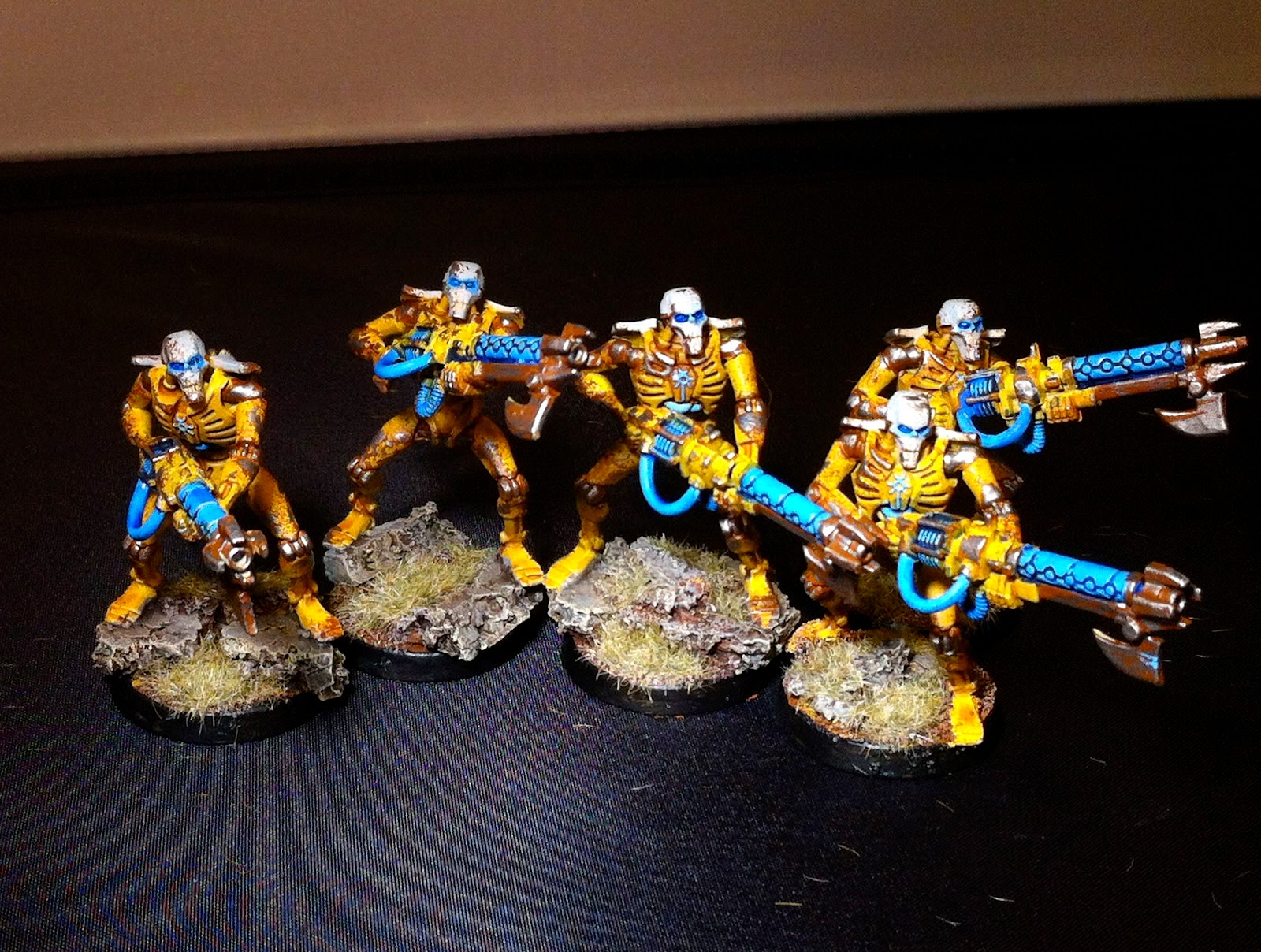 I really love the colour scheme above, problem is, I've never painted in yellow before, and I wouldn't say I'm the most accomplished painter, so the risk is I end up with an army that looks like I've stolen it from the paint factory.

Should I risk it and kitbash? Or would it be wise t ocontinue the standard scheme already in place...

Either way, the rumours have got me thinking about the connotations of a new warrior release even in the far future, and the effects this might have on your armies. One thing for certain though, it will make the army feel as one, we are legion.

Don't forget to share this post and follow us, either by becoming a member for free (see right), or by following us on google+. If you want to become part of the blog exchange, simply message me, or leave a link to your site in the comments section below. Thankyou.
Labels: 40k Rumours Zarak
Location: Newcastle upon Tyne, Tyne and Wear, UK